If you're interested in starting a freshwater community fish tank, you're likely wondering what varieties are the best freshwater aquarium fish to choose from. Read on for the answers to some common questions.

1. What Are Freshwater Aquarium Fish?

2. What Will You Need to Keep Freshwater Aquarium Fish?

To keep freshwater aquarium fish, you'll need an appropriately sized fish tank, fish food, and fish. Your fish will need habitat in the tank, like plants and cave areas. To maintain water quality, you'll need an aquarium water testing kit, chemicals to treat the aquarium water as needed, and supplies to clean the fish tank. Your tank size may limit what your best freshwater aquarium fish options are.

3. Can You Keep More Than One Kind of Freshwater Aquarium Fish in a Single Fish Tank?

Absolutely. The best freshwater aquarium fish for a community fish tank are non-aggressive fish that thrive in similar conditions. Choosing fish that occupy different levels of the fish tank is ideal as it provides the best display and allows for different fish to occupy different areas to maximize fish habitation space in the tank.

4. Where Can You Buy Freshwater Aquarium Fish?

We gathered information on some of the best freshwater aquarium fish for beginners who are suited to a community fish tank environment. Reviews of each variety of fish were based largely on suitability for inclusion in a community tank, ease of care, and price. For the purposes of this review, the best freshwater aquarium fish are peaceful tankmates, easily cared for, and require moderate tank space.

Overall Price Range of This Product (and Similar Products) 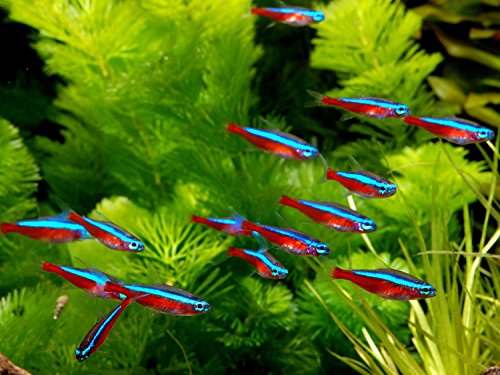 Tetra cardinals are lively red schooling fish with a bold stripe of bright blue that should be kept in groups of at least six.

Tetra cardinals need water in the 5.5 to 7.5 pH range with temperatures between 73 and 81 degrees Fahrenheit. They occupy the mid-level or bottom levels of their fish tanks.

For breeding tetra cardinals require a pH of 5.0 to 6.0 and low light. The fry should be housed separately. 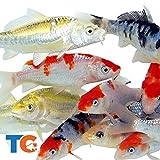 Koi are stunning, long-lived fish that are available in a wide variety of colors and patterns.

Feed koi foods that are specially formulated for koi as they have an increased requirement for carbohydrates compared to other types of fish.

Koi can survive in an impressive temperature range but should be kept at an optimal temperature of 68 to 77 degrees Fahrenheit. They need a water pH of 7.0 to 9.0. Tanks with koi fish should have two inches of substrate and lids to prevent koi from leaping out of the tank.

Koi are typically bred in ponds in late spring and early summer. If you breed them in fish tanks, separate the eggs to prevent them from being eaten.

A peaceful fish that can be outgoing and may take food from your hand.

Pearl danios are schooling fish with shimmery pale purple-blue bodies and an orange-red stripe. Easy to care for, these are among the best freshwater aquarium fish for beginners.

Pearl danios need water with a pH of 6.5 to 7.0 and a temperature range of 64 to 74 degrees Fahrenheit. They do jump, so keep their tanks covered.

Breed pearl danios in a breeding tank with water temperatures between 79 and 86 degrees Fahrenheit. Remove the adults after spawning to protect the eggs. 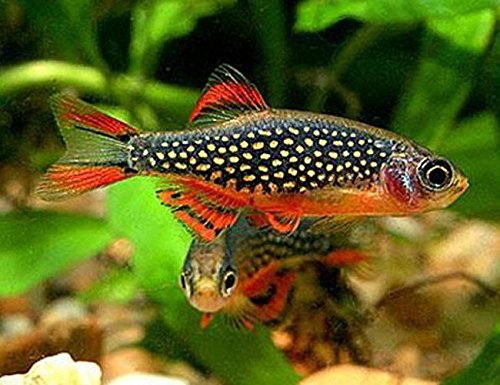 Galaxy rasboras are uniquely shaped schooling fish with a stunning pattern of dots. Males tend to have a brighter blue base coloration while females are a duller blue-green.

Galaxy rasboras can be fed brine shrimp and daphnia.

Galaxy rasboras need water with a pH range of 6.0 to 7.5 and temperatures between 74 and 79 degrees Fahrenheit. They prefer a habitat with live plants.

Breeding should be done in a separate tank so adult fish can be removed after spawning.

The Kribensis cichlid is a colorful dwarf cichlid that has the same remarkable personality as its larger cousins. Unlike many of the larger cichlids, Kribensis cichlids do not display extreme aggression or pose the same housing challenges.

Kribensis cichlids are omnivorous and can be fed a diet of Spirulina-based flake food supplemented with proteins like bloodworms, daphnia, and brine shrimp.

Kribensis cichlids are bottom-dwellers in the fish tank. They prefer a habitat with cave areas and considerable vegetation. They need fresh water in a neutral pH and prefer temperatures at around 77 degrees Fahrenheit though they can be kept in temperatures ranging from 75 to 80 degrees.

Occasionally a male and female pair will not breed for some reason but typically temperatures closer to 80 degrees and a rich diet will result in breeding.

Sex of the fry is determined by the pH of the water. At 7.0 the fry will be of both sexes. More acidic water will result in more females and more alkaline water, more males. It is possible to get a brood of entirely one sex.

Much less aggressive than other cichlids, though they do become more aggressive during breeding, particularly to other bottom-dwelling fish.

GloFish are a manmade creation that is the result of the injection of a jellyfish gene into a fish. GloFish are commonly originated from danio, tetra, or barb fish crossed with the jellyfish gene.

Glofish are highly active fish with vivid fluorescent colors that add a unique flair to any fish tank in which they are included.

GloFish are omnivorous and can be fed a diet that includes flakes, pellets, frozen, and freeze-dried foods. For the healthiest GloFish, vary the food sources.

GloFish prefer a tank with plenty of hiding places. These fish can be kept in water temperatures between 72 and 82 degrees Fahrenheit. GloFish can tolerate pH ranges between 6.0 and 8.0, though there is some variation depending on the origin of the fish.

GloFish fed a rich diet are able to breed but note that any resultant fry cannot be sold as GloFish are patented.

Guppies are easy to care for and can be found in almost any color you might desire to add to your fish tank.

Guppies are omnivorous and can be fed algae, brine shrimp, daphnia, and bloodworms.

Guppies prefer water between 78 and 82 degrees Fahrenheit. Adding a tablespoon of salt to the fish tank is ideal for guppies. They dwell in the top to the mid-range of the fish tank.

Guppies breed easily, but a female must breed with multiple males. Breeding temperatures for guppies are in the 72 to 79-degree range. Unless the fry are removed or have many places to hide, they will be eaten by their parents and other tankmates. 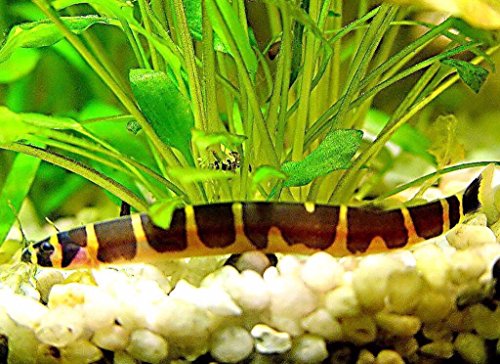 The kuhli loach is a striped, relatively long-lived bottom-dwelling fish that is most active at night. They are a yellow-pink color with dark stripes.

Kuhli loaches need a tank with a good substrate layer, multiple hiding spots, and prefer many live plants. The water should be between a pH of 5.5 and 6.5 and between 75 and 86 degrees Fahrenheit.

Kuhli loaches are very peaceful and more confident in a shared tank. 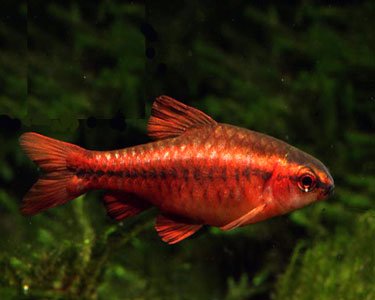 Cherry barbs are bright red schooling fish that will bring a pop of bold color and activity to your fish tank. Cherry barbs are among the best freshwater aquarium fish for beginners.

Cherry barbs can eat algae, plant matter, daphnia, brine shrimp, and bloodworms. Be sure to supplement plant-based flakes with protein.

Cherry barbs need a well-planted fish tank with a water pH range of 6.0 to 7.5 and temperatures between 73 and 81 degrees Fahrenheit. The occupy the middle range of the fish tank.

Cherry bars breed easily. Eggs must be removed to prevent them from being eaten.

Cherry barbs are quite active and peaceful fish.

A corydoras catfish, or cory catfish, is a hardy fish that will help clean your fish tank. Cory catfish enjoy the company of other cory catfish, so if you have space for several in your community tank that is ideal.

Though cory catfish can eat a variety of food types and will scavenge for uneaten food, do be certain to be sure that your cory catfish are also being fed enough to see to their nutritional needs.

Cory catfish do best with at least two inches of sandy substrate and many live plants. They need water that is between a 7.0 and 7.8 pH and that is between 72 and 78 degrees Fahrenheit. Cory catfish can jump, so keep a lid on your tank if you keep them.

Cory catfish can breed in a community tank, but eggs must be removed to prevent cory catfish or other tank residents from eating them.

Cory catfish are active and curious fish who are social and non-aggressive with tankmates.

The best freshwater aquarium fish for each individual will depend on a number of factors, including the tank size, ease of care, and the most desirable visual aspects.

For beginners, the best freshwater aquarium fish are probably a combination of cory catfish, cherry barbs, and galaxy rasboras as they are all relatively easy to care for, thrive in similar conditions, and provide a variety of colors and behavior patterns.

For those most interested in dramatic colors, go for GloFish, kuhli loaches, and galaxy rasboras.

Packing Up Your House? Read These 9 Tips on How to Move a Fish Tank

Why Does my Fish Tank Smell? Five Stinky Reasons and How to Fix Them